Upwind sailing can be a real challenge, and is an aspect of sailing that takes a lot of practice and patience to develop.

Some may initially find it a little difficult to grasp the concept of upwind sailing, but with the aid of vectors indicating the forces applied the process can be explained a little easier.

Upwind Theory – the forces on a boat

As in the diagram below, when wind enters the sail, it is forced to curve around the belly of the sail. This curve in the sail can be represented by a force (call it wind force ‘w’) acting at 90° to the sail. This force ‘w’ is made up of 2 components – 1 acting sideways on the boat (call it ‘s’), and another pushing the boat forwards (call it ‘f’). By using a fin, we minimize the amount of sideways slippage, and maximize forward motion. 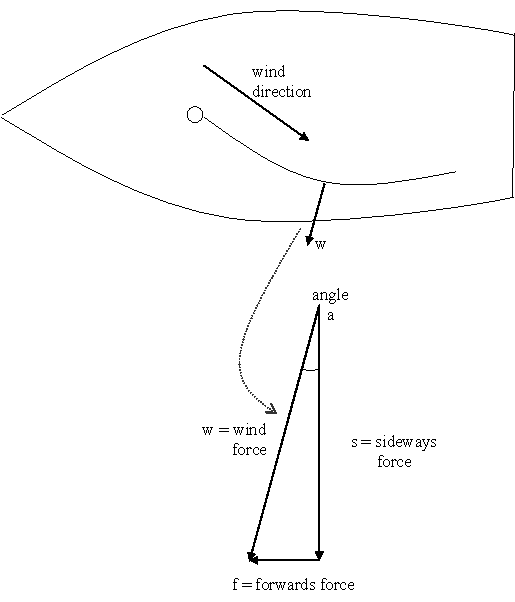 Forces on a boat when sailing upwind

You can see that the more you pull the sail in and sail upwind, the smaller angle ‘a’ will become, which will result in a smaller force ‘f’. The smaller the forward force ‘f’ pushing the boat, the slower the boat goes. Conversely, the more you bear away and let the sail out (up until the point before it starts to flap in the breeze), the greater the force ‘f’, and the faster the boat can potentially go.

The fin acts in a similar fashion to the tires on a car. They both minimize sideways movement and allow easy forward movement. For example, if you push a car on an angle, it will resist moving diagonally, and instead will only move in a forward direction.

For this reason, the fin should be all the way down to minimize sideways slippage.

For more tips on how to get more out of your upwind sailing, check out this video with self-coaching tips from British Sailor Penny Clark who competed in the 2008 Summer Olympics…