If you’re new to the sport of sailing then you may find it advantageous to learn some basic sailing theory to speed up the overall learning process, inevitably making it more enjoyable and less frustrating.

This theory applies to most, if not all, sailing craft, so if you don’t end up progressing with lasers, it will assist in other forms of sailing also.

Sailing Theory – How a wing works

A sail can be likened to a wing in the way it works. When a wing moves forward, some air passes below the wing and some above. Due to a phenomenon known as the Coanda effect, air will tend to follow an adjacent surface that curves away from the flow as long as the curvature of the surface is not too great.

When moving air changes direction, a force is generated. As shown below, a wing has a relatively flat bottom face, and a more rounded top surface. Since the wing has different shapes along its top and bottom faces, the air has to travel different distances, and thus at different speeds, across these faces. The faster-moving air across the top face causes a region of low pressure, creating the lift that the wing needs.

Similarly to the lift created in a wing, the low pressure created by changing the direction of the wind causes a force (call it wind force ‘w’) to be exerted on the sail. It is this force which is used to move the boat. 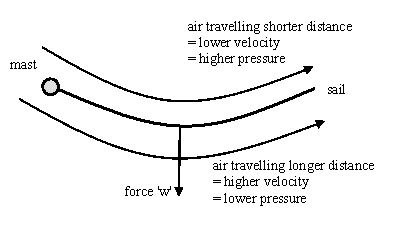 The force created by a sail

However, to utilize the force of the wind most efficiently, the sail has to harness the wind’s power efficiently. And to accomplish this wind has to deviate in direction over a sail’s surface as smoothly as possible. To generate the lift required, wind passing over both sides of the sail has to follow the curved profile of the sail surface. This is achieved with the correct amount of curve in the sail, and having the correct angle of the sail to the breeze.

To get the most amount of force moving the boat forwards, you need to deflect as much wind as possible around the sail. This is shown in the diagrams below. 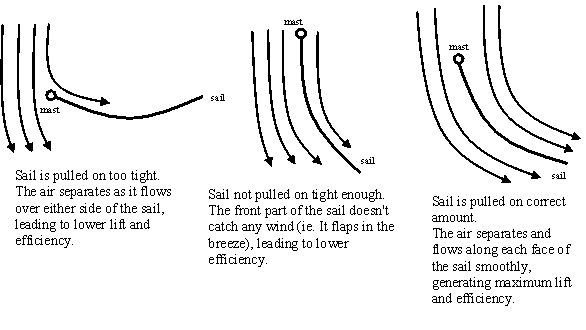 Wind being deflected by sails at different angles

Previous: How To Learn To Sail