The vang is used to pull the end of the boom down, changing the shape of the sail by bending the mast. The more you pull on the vang and bend the mast, the more you flatten and depower the sail.

When sailing upwind in stronger winds you want the sail as flat as possible, so you want the vang pulled right on. When the vang is pulled right on and a gust comes, you should be able to let the mainsheet out, and the sail remains flat (ie. the boom moves out, not up, keeping it de-powered). If you don’t have the vang on hard, when you ease the mainsheet out, it will power the sail up, having the opposite effect of what you desire. This will make the boat very hard to control. 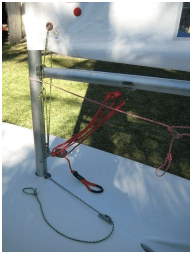 As a general rule, in a comfortable ~10 knot breeze when you are sailing upwind and are able to hike out but are not struggling, pull the mainsheet on so that it is block-to-block, and then pull the vang on tight, and then a little bit more. This will bend the boom a little, but when you ease the mainsheet, the boom should raise about 45cm or 18in.

As the wind increases, you need more vang so that when you ease the mainsheet in the gusts, the sail remains flat. Ideally, you only want the boom to only move a few (3-6) inches when the mainsheet is eased. That requires a lot of vang tension and is the main reason why many sailors have opted to upgrade the entire vang system.

If you have the vang on quite hard at the top mark, remember to ease it off slightly just prior to rounding, otherwise, it makes it difficult to pull away to round the mark. It may also cause the boom to dig into the water on a reach, which may end up in you taking a swim.

A loop at the end of the vang (eg. a bowline, if it does not come with a pre-made knot) is recommended so that it provides an easy holding point. Many also have a small length after the loop and tie it to the centerboard so that it can be easily reached.