In the world of Laser sailing, Australian Michael Blackburn is a leader and champion. He won an Olympic Bronze medal during the 2000 Summer Games in his hometown of Sydney, Australia. In March 2005 his world ranking was 3rd in the Laser, the world’s most popular sailboat.

Early in that month, Blackburn added to his achievements with a laser sailing record-setting crossing of Bass Strait in a Laser dinghy. His time on March 9th 2005 was recorded as 13-hours and 1-minute and was within his projected time for the attempt.

In an interview conducted days before the trip, Blackburn stated he required 14 to 25-knot winds from the southwest to south-southeast (so effectively sailing downwind and/or reaching for the entire journey). His strategy was to sail downwind only and even then he estimated the crossing would take 14 hours.

Bass Strait separates mainland Australia from Tasmania and is 140 nautical miles (252-kilometres) wide. As the waterway is described as shallow and has a tendency to be affected by weather patterns from the Arctic region, this makes any crossing challenging. 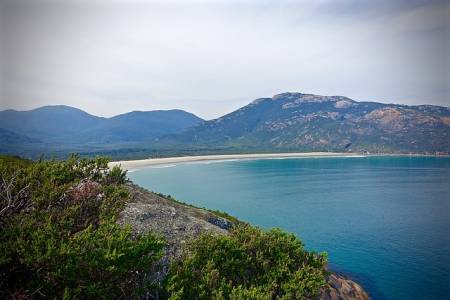 It is also because of the ‘personality’ of the waterway that it is also believed to be a dangerous route and is normally navigated in vessels much larger in size than a Laser (the Laser has a single sail, measures only 4.2-metres in length. It is a single-person craft without a full cockpit or engine).

Blackburn had a support team and was joined by a mother ship along the route. The route itself was anything but simple. Blackburn launched from Stanley in Northern Tasmania at 3:30 am. He sailed 115 nautical miles to Tidal Beach in Wilsons Promontory, which is in Victoria, Australia, setting foot on land again at 4:31 pm.

Blackburn set sail with 7-square metres of sail and winds ranging from 15 to 20 knots. He described the time before dawn as “pretty hairy” without the visual of the moon or stars for guidance. He even filled the cockpit with water a few times as a result.

He was relieved when light arrived shortly after 6:00 am to reveal that the waves were not as big as he imagined they were in the dark. Blackburn described the entire event as exciting calling the Laser a fun sailing boat for downwind sailing and said the entire day “has just been a blast.”

The maximum speed recorded during the attempt was 19.7 knots as Blackburn sailed down the face of a huge rolling wave. The average speed for the entire journey was between 8 and 9 knots. The record time shaved off several hours from the previous one.

Blackburn’s time of 13 hrs and 1 minute is substantially less than the December 1998 record set by fellow Aussie Nick Moloney. Moloney’s funboard crossing was recorded as taking 21 hours and 49 minutes from start to finish.

He continues to coach sailors but has other interests. Blackburn holds a Human Movement Studies Ph.D. and sells downloadable sports psychology products through the company he founded SportsMindSkills.com.

You can see more in a YouTube video outlining the Bass Strait laser sailing record feat below:

Posted in Sailing Blog
← Summer Sports For Kids: Learn To Sail at a Summer CampHow Does Boating Affect The Environment? →